After dominating the Vertical Carousel market,  Vidir is in hot pursuit of dominating the vertical lift world. And why not.  A solid workhorse with a safety and price point track record let’s look at this Vidir Vertical Lift! Let’s dig in a bit. Normally Vidir Vertical Lifts are customized, machines and they’re heavy duty machines. Each position here that you see in this rack is five thousand pounds per position! At five thousand pounds a position, you have a lot of weight in these units. 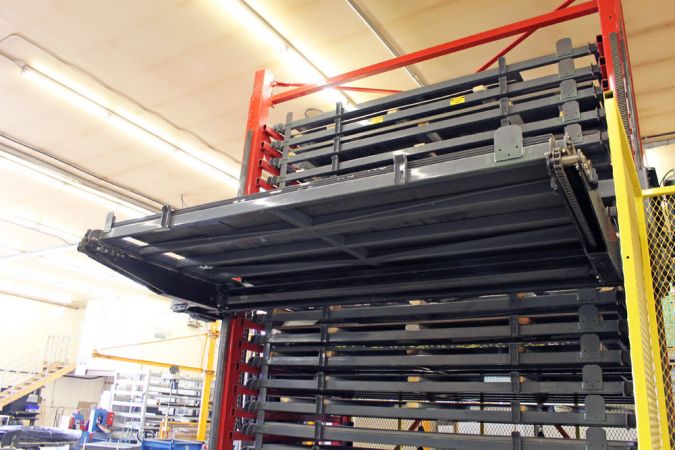 Vidir has been a trusted name and making products safely accessible for more than three decades. The Vidir, VLM is upholding that legacy. The VLM Industries First Servo motors provide an unparalleled combination of speed, power and accuracy, meaning you know what to expect from the machine each and every time an employee picks a product. The industry first servo motors ensure fast and accurate picks without the need for constant calibration. They reduce process time and improve output. In most setups. You either get speed or weight capacity, but not with the beta volume servo motors. You don’t lose either, even when traits are maximized. Auto sensing capabilities allow the machine to pick the most efficient location for each tray, bringing added efficiency, productivity and ROIC while keeping storage density high, a cutting edge laser and sensor array tray presence, proximity and homing sensors and laser sensors for rail positioning ensure tray movements are accurate, fast and eliminate errors and shutdowns. That density is further improved by the VLM’s multilevel rail systems, which offer robust, flexible movement with up to six positions available. Portray the Vidir rail system provides efficient storage combined with strength and durability.

If a catastrophic failure were to occur, our flexible rail system is easily repaired, unlike competitive equipment, a low maintenance, high strength, an extremely durable chain drive breaks further peace of mind. The Vidir volumes chain drive exceeds the industry standard and removes the downtime that comes with the use of belts. The Vidir VLM is shipped, factory tested and offers plug and play connections for easy installation and use, as well as a front access draw in quick connect ease for simpler maintenance. Finally, as a heavy duty, seismic ready solution, the Vidir VLM is ready to serve you for years to come help you cut your storage footprint by up to 85 percent and keep your employees safe. To learn more about our innovative VLM and how it can help you increase safety, boost productivity, reduce labor costs, maximize storage, improve inventory management and shrink your storage footprint. Contact  NationWide Shelving today at 800-326-4403. 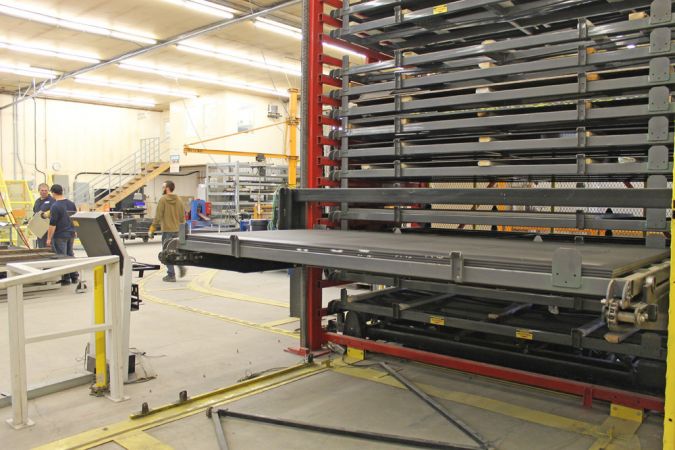 They’re expensive machines, normally one hundred and fifty to two hundred thousand dollars apiece. Yet, they’re really popular right now. They take a huge issue for companies storing with sheet metal and using cantilever tracks and they eliminate the problem. Eliminating the need to run forklifts with five thousand pounds, 20 feet in the air. The heavy sheet metal is all accessible and at waist height. The elevator will run up a track system, stop at the carrier the operator desires. It will extract the carrier, drop the carrier down and bring it to a working height for the worker to do what they wish.

Bar stock. Vidir offers tons of options for Bar stock. Bar Stock Vertical Lifts for bar stock start at a 10 foot wide product and goes all the way up to twenty four foot long products for the stock where they go all the way up to twenty seven for as well. So the bar stock options for each carrier you can get in a variable heights. We do 10, we do a 14 and then we do an 18 inch high so we can play around with that as well for the vertical lift the sheet metal. Those are all states that three and a half inches there. And we also have a five inch spacing too. So depending on the customer ceiling height, they only have 15 feet. We probably want to stay at that three and a half inch spacing because they’ll still get 20 carriers. But if they have twenty seven feet of ceiling height, well, we can give them five inches between each unit of Cranage carrier and then they’ll still have at twenty seven feet tall, still get 20 to 30 carriers. So those are all we’re working through that when we get a customer and we have specs, those are all options trying to maximize the machine and keep it as dense as possible. Any questions on vertical lift systems. The motors are mounted on the outside here. There’s motor on each side. The elevator capacity is five thousand pounds. So not not the power capacity. So the power can have 5000 pounds of all positions. Read More….

Same thing for the vast system to ride out this elevator or ride up the system and stop the carrier, extract the carrier and drop it down for working hard. So. Although over some of the options here, we can get pretty custom with these as well. The standard sheet sizes five by 10, which is 60 by 120, but don’t pay attention to that. We’ve done them at 60 by 144. We’ve done about 70 to by 310. I mean, we’ve done all sorts of sizes for sheetmetal and for Bastide. So they’re pretty customizable units. When you played storage storage for these obviously sheetmetal of them, Plexiglas, glass storage, plexiglass sheets, there’s a big variety for what you can put. If it’s a flat surface and it’s in that shape, that rectangle shape, we can put it on here. The units are a little expensive for whatever. Had a few customers now come to me for plywood. Keep in mind, you have one hundred and fifty two thousand our system here. So to put a bunch of wood on a two hundred thousand, our system usually doesn’t.

The numbers don’t make too much sense for the customer. They’re rated for five thousand pounds per position and the wood on that system would probably be like seven hundred pounds. So it’s really overkill for what I try to stay off of them unless they have a really big budget to work with and need a solution other than any sheet metal glass, stuff like that. Heavy materials, it’s usually a go.

There’s there’s a couple of options. I want to go over here with the cart system. This cart is a self-propelled cat. It’s got its own motor system, its own, its own sensors on it so that the material will drop down.

Picture down here, up here. So this cart would be set right here, the carrier, the elevator would bring the carrier down onto the cart and now the cart is mobile with the product. So that cart can only go in two directions. So if we if we do, it can go either out the left or the right or out the front in the rear. A lot of times customers will buy this unit and they’ll have a cart system that will take the sheet metal to a certain product. Could be a LaserJet, a Press Break or many other types of machines you might work on sheet metal. So the material gets brought down and get set on the cart. And then from the controls of the unit, they’ll be able to send the cart to their piece of machinery. They’ll put a few pieces off. They’ll use that. They’ll load it back up, they’ll send the cart back to the machine and the carrier will pick the product back up and put it back away. So that’s sort of a touchless, perfect scenario.

We do do that cart option quite a bit. Now, we also have a dual tower system where there’s two towers front to back and the elevators in between. So it cuts down on a footprint and then allows you to store twice as much.

Yeah, can you run through the applications for the bar our stock is.

Yeah, so I always say four vertical lifts for sheet metal or for anything, any facility you can think of that’s running an overhead crane.

We’ve done them and John Deere.

Ok, so the last one I quoted today was two hundred and sixty one thousand dollars and it was for a trailer company coming here, item numbers there and saved this company. This one’s for one hundred and forty thousand dollars. That’s for another trailer manufacturer. That’s going to a customer that builds tractor trailers. So that’s that’s four actual trailers They build mainframe buildings for like pole barn systems. So as a bar stock quote right there can come through some customers and see how many. And there’s another one in here, Efendi Manufacturing, they build boilers, John Deere, Monsanto, and…. yes to Space X Division. And NASA has a heavy manufacturing. We’ve sold them to TTC, Toronto Transit Committee. They use them for subway cars and replace subway cars and train cars, auto manufacturers, a few other customers we do trailer manufacturers, sold to a customer that builds mail trucks. They manufacture mail trucks, boilers, oil tanks, stuff like that. Anybody who’s in large sheet or bastide for building manufacturers because they put their beams in there, window companies. The extrusion around the window, they put in Vidir vertical lifts. So there’s there’s a lot of any heavy duty manufacturing. Someone has sheet metal laying around. It’s a pretty big investments. customersthat’s doing hot water heaters or anything like that, a bunch of Vertical Lifts at Caterpillar, those big guys that are mass producing stuff and have a pretty good system have the capital for it. It really cuts down on forklift traffic. It cuts down on the time it takes to pick materials, it cuts down on damaged materials and it greatly improves the safety.

Nasa bought Vidir Vertical lifts in California. That was for that was for SpaceX. SpaceX bought them NASA, JPL, the Jet Propulsion Lab. They bought them for for building rockets. Definitely the aerospace industry is a good industry for Vertical Lifts. The SpaceX units were for a clean room so they can be put in a clean room. Keep that in mind if you’re in the aerospace industry. They can go into a clean rooms. And, yeah, that’s that’s good because aerospace is a  huge user of Vertical Lifts. Auto manufacturers are huge users of vertical lifts, heavy manufacturing, modular building manufacturers are huge users.

Vidir vertical lift system for industrial goods is a high capacity automated storage system. The VLS increases material throughput, workplace efficiency and safety. The VLS features an elevator that climbs the front of the tower to deposit and retrieve cartridges. This allows for direct delivery to production machines, creating a continuous material flow while reducing material changeover times. Traditional storage occupies a larger footprint, is less time effective and presents the possibility of catastrophic failure. The VLS provides a controlled environment that can safely store and retrieve material while making use of overhead space. The system can accommodate a wide variety of material types and dimensions, making it a go to storage system for your specific needs and applications. Carts can be integrated to load and unload the system with multiple cart paths available for site specific requirements.