Essentially the Vidir Pan Carousel is a shelf carousel so don’t get confused between the two units from the name. Vidir named this line a pan carousel just because this carousel design came after the Vidir Shelf Carousel line was developed. So Vidir named this a Pan Carousel, but they’re both technically rotating shelves. The Vidir Pan Carousel line is a little bit fancier than the Vidir Shelf Carousel. It comes automatically from the factory with light curtains, a work counter comes standard with the unit and an emergency drill drive in the system for back up to get things put of the machine in an emergency. It’s got a full enclosure, skins, to keep dust out of the system. Yes, it’s got the fancy panels on it. Most of the time, inventory control is added to this unit. So you can keep track of your inventory. You can search by part number or product descriptions. Pan Carousels are a step up from the Vidir Wire Carousel. This is the automation that a lot of companies are trying to add and Vidir sell lots of these.

Pic of Specs on pan carousels

There’s some rough specs to take a look at and a few options on different pan sizes and different unit sizes you can get. Vidir supplies three phase power for almost all pan Carousels.

There’s a couple of things that make the pan carousel unit unique. As you can see in the picture there’s a light that comes factory standard with the Pan Carousel. We have the capability of putting a security lock and gate in here. You have the light curtains tucked in there factory standard. The power disconnect comes standard. This touch screen is added in as an option. But most customers do get that touch screen that is in there. This is this is the Cadillac of machines Vidir builds. 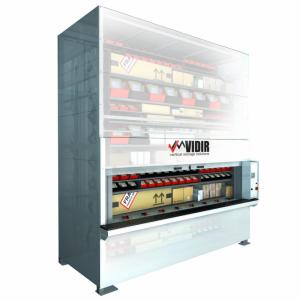 Here’s a couple of pictures,

This is a unit just installed in one of Vidir’s own factories. It’s got a nice, clean look and it holds a lot of products. That one we’re looking at right there is a 10 foot carrier. We also do a 10 foot carrier which is 12 foot six overall. So add two and a half feet for overall outside dimensions on Vidir Pan Carousels. So there’s a 10 foot carrier. We do an eight foot carrier that’s 10 feet six inches overall. And then we do a six foot carrier that would be eight foot six inches overall and the height is always variable. The depth on them is going to be the same, but the height is definitely variable. Vidir starts offering them at about eight feet tall and go all the way to twenty seven feet tall. So if you can, if you can get a tall one in the facility, you can fit a ton, a ton of stuff at twenty seven feet. You can fit hundreds and thousands of boxes on these things and hundreds and hundreds of pieces.

We have customers put anything you can imagine in the pan carousels. Plastic extrusion bar stock, ball bearings, you name it, down to little electrical components for a companies like Eaton. Eaton buys pan carousel machines for electrical components like fuses and switches. Pan carousels are also used for filing paper records and for evidence in sheriff’s offices. The cannabis and medical marijuana industry has been purchasing pan carousels for drying marijuana and for storing medical marijuana. We have customers that retrofit them and make them able to control humidity afterwards. The possibilities are endless. Anything stored in a normal shelf in a building is limited to six feet because of the reach of a person. Because companies can go up to the ceiling with pan carousels we can get you super dense storage.

You can see these carriers, shelves, are a little bit shorter. And that’s because we have a mid-level shelf. It’s called a mid-level divide. So those two standard carrier options would be 18 inches deep by 12 inches high. And then we have an 18 inches high by twenty four inches deep. Those are two standard carriers. We have a few other options, too, but that’s most often done. And then you have the option to divide a carrier, shelf, in half.

So you can see this carrier down here there’s two shelves, each one of those shelves is about eight inches tall. So that would be an eighteen inch height and then we divide the carrier. So those shelves fold in and out.

You can have a ton of different options and changing the heights. So basically with these, if you get us your ceiling height, and a rough idea what you are storing with the maximum dimensions of what you are storing, we can do the math for you and figure out what we can put in this machine, how dense the machine is going to be, how much room you are going to have for growth and how tall a machine you really do need. Maybe you need two units side by side, maybe you need three units. Maybe you can do one unit and allow for 15 percent growth. If you can just give us the rough, the nitty gritty description of your inventory and the ceiling height we can start pricing out options for you.

Pan carousels range in price anywhere between forty five to sixty five thousand dollars. Sometimes seventy thousand depending how big you build them and the automation you require on them.