The Easiest, The Cheapest and The Best Way to Speed Up Picks and Reduce Pick Errors. Storeganizer!

80% of customers who buy Storeganizer buy more in the same fiscal year!

Put many many more SKU’s in your “Golden Zone” with Storeganizer. That means less travel time while picking.

Increase picking speed by 20% ! Yeah 20%!!! That means ever staff member has almost 2 extra hours per day to pick additional orders! 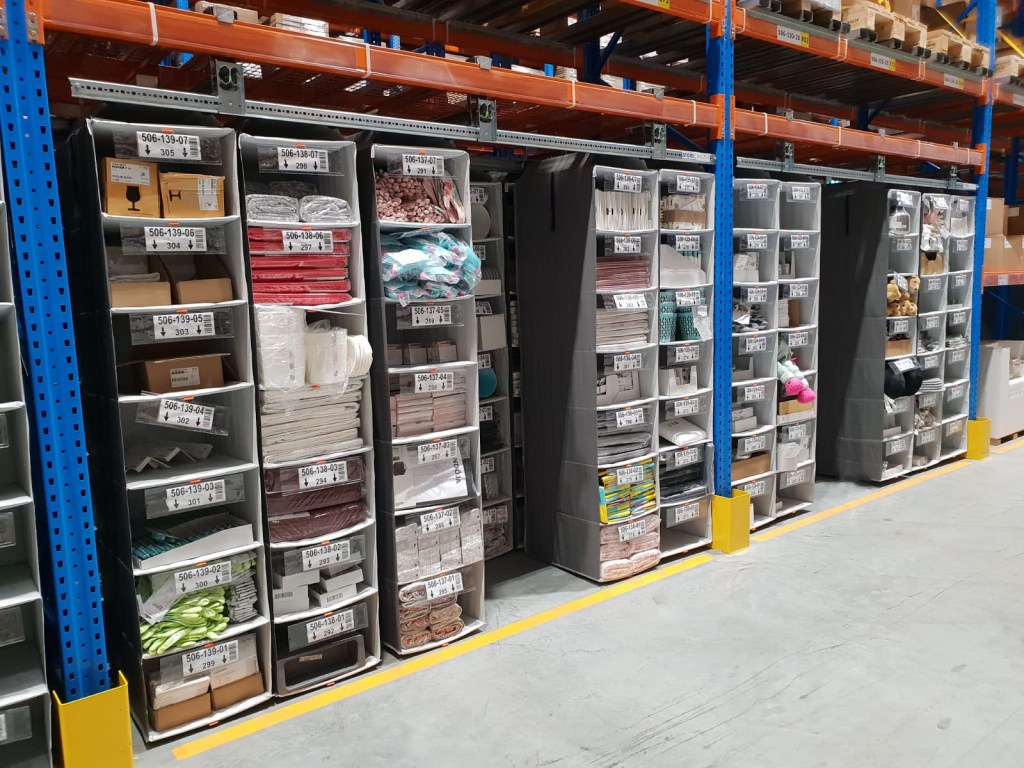 This existing DC set a goal to increase space in the warehouse.

The Operational Director with Ingram Micro, choose Storeganizer to increase picks and reduce pick errors. This fulfillment Center, 3PL, provides fulfillment services to their customers from three warehouses. One facility is 54,000 square feet and in total the tree locations have more than 162,000 square feet of warehouses. With the growth in product assortment and SKU’s just made it necessary to find a new location where more products could be stored in a more efficient way to fulfill the needs of their customers to organize and have a positive impact on the amount of moving locations could be created within the same area. The Storeganzier helped with organization to have three to four times more big locations within the same footprint 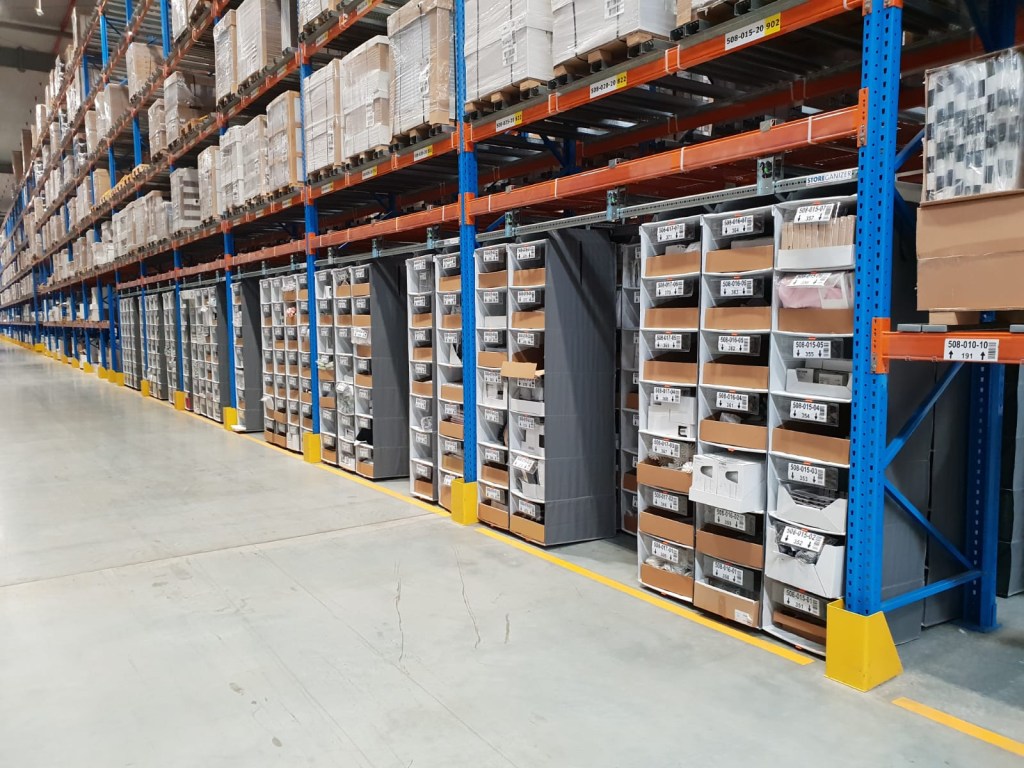 Storeganizer in a DC for Technology Based Computer Products

In evaluating the Storagnizer solution they wanted to know how easy the columns would be to move when full.

This is the U.K. National Distribution Center for Ingram Micro. We distribute technology products, that’s computer based products.

Our main goal was to redesign the warehouse, to create more space, so the organization was part of a six phase plan. A very key part of it to release space. We had more space for a fast moving product.

We had two concerns when we started the project. One was the weight of the columns and how easy it would be to move them. We went on a reference site visit and we moved fully laden pockets and columns and found them to be surprisingly easy to move. So that concern was eliminated. The second concern we had was if there would be enough light in the back rows of pockets. We found that there is more than enough light to do the picking accurately. 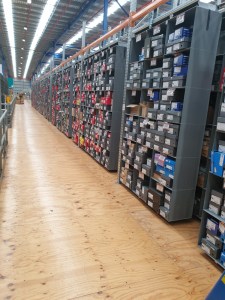 It turns out staff actually likes to work in the section of warehouse with the Storeganziers because it’s very easy for them to pick and walking distance is much less normal in the warehouse. At end of the day, they are not so exhausted, like normally.

The Storeganizer has delivered so far on three main improvements. The first is it’s around about 80 percent full and the space it’s released is already twice as much as the existing room was. We’ve seen improvements on the pick rate of  about 10 seconds per pick versus its original solution. And once we compete, we optimize it will start releasing more space so we can reduce the replenishment.

The big improvement is in terms of storage density. In terms of our picking, we define our efficiency as a hit rate. How many sku’s we can hit for a given travel distance? And with the Storeganizer solution, they are now hitting 40 percent more SKU’s per linear travel distance than previously. And when we start using this organized section, we see that this is a huge progress on our productivity. We are using this special code for this section and at the beginning was seventy five lines per hour. Now it’s about 90. The future will be more because these numbers are going up all the time. They will be buying more Storganizer bays because they see a lot of benefits for this section.

They recommend to consider the Storeganizer solution wherever you’re considering some form of dense storage, be a vertical carousel, be it flow racking or even a low level mezzanine. The Storeganzier can go up against those solutions because you’ll probably find you’ll get most of the benefits at a fraction of the cost! 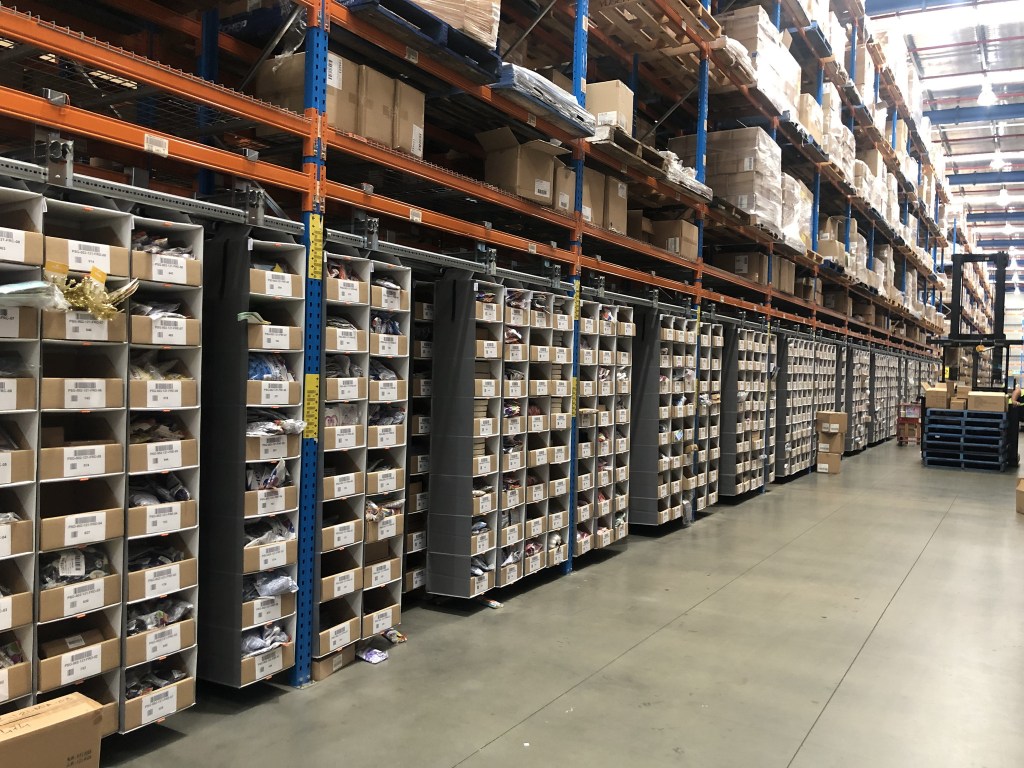 It can be hard to pick a name for a product when a product is so many things in so many applications! Get more SKU’s into the golden zone for fast picking. 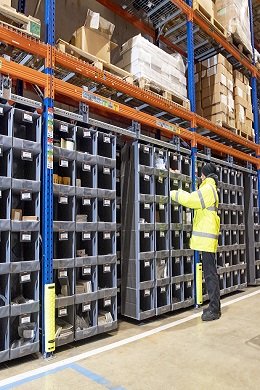 Storeganizer For the A Moving Products in a Warehouse

The Chalhoub Group is a leading partner of luxury in the Middle East, specializing in retail, distribution and marketing services. The group has become a key player in gift’s, beauty, and fashion across the region. Operating across 12 sites in the Dubai region with warehouse space of approximately 860,000 square feet. Due to the expensive luxury items they sell, the quantity of each item, per SKU, is low, but the number of SKU’s is very high. So we were looking at a way to be able to maximize storage. Chalhoub did a proof of Concept (POC) and the Storeganzier  showed a really good return to maximize the space in the warehouse. Not only did it maximize the space but also allow for significant reduction of travel which meant more picks could be made each day without increase in staff. That means more orders ship that day.

What needed to be accomplished for easier order picking

8600 feetof static shelves needed to be consolidated from the mezzanine floor to the “Golden Zone” for easier picking. This was important because the goods need to be picked for their customers and shipped the next day, Storganizer proved to be the best ROI solution since it incorporated our existing pallet rack for the picking truck, which was currently on the floor. Storeganizer allowed for consolidation of 800 meters squared of space to 124 meters squared of space in 46 Storeganizer bays. Each bay has 3 rows deep of storeganizer with 6 colums high for 828 pick modules.

Typically one SKU is stored in each pocket. However, for one business unit they opted to go with slightly bigger pockets  for easy replenishment. The solution allows for piece picking and for batch picking. There was a significant operational improvement with Storeganizer.  With the static shelving speed of picking was about 25 to 30 lines of picks per hour. With the Storeganizer installed picks are up to 60 to 80 lines per hour!!!!! The number of picking errors has been reduced as well since each SKU is placed in its own unique pocket location. Overall, operational efficiency has increased 30 percent, and due to the big jump in productivity, two less full time staff are now required.

The Storeganizer gave the flexibility to consolidate and store more products with minimal investment. Now, as 80% of Storeganizer customers do, they are ready deploy another Storeganizer solution for 150 bays in a second site. 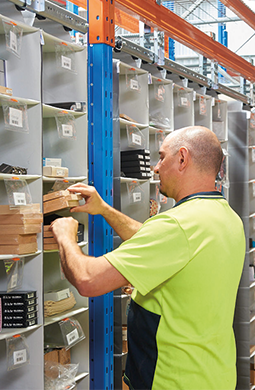